Nov 30: Magnus Carlsen wins the tie-break rapidplay 3-1 to retain his world title, finishing in style with a queen sac to force mate. 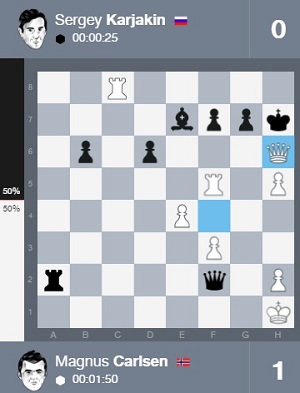 The match was drawn 6-6 after the first 12 games - one win each, rest drawn. Tie-breaks took place on Wednesday, November 30 (Carlsen's 26th birthday). 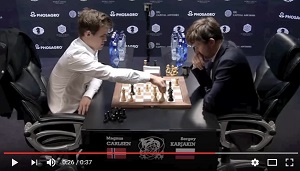 Intro: Magnus Carlsen of Norway defends his world title against Sergey Karjakin of Russia in New York, November 11-30.  The match takes place in the Fulton Market building in Lower Manhattan.

1) A four-game match with 25 minutes + 10-second increment rapid games
2) If the scores are equal, then a maximum of five mini-matches of two blitz games at 5 minutes + a 3-second increment
3) Only if those 14 games have proved indecisive will we get a World Championship decided in an Armageddon game, where White has 5 minutes to Black’s 4, but a draw will make the player with Black the World Champion.