Ian Murray, Labour MP, Edinburgh South, returned to his alma mater, Wester Hailes, to give out the prizes  at the UKCC Megafinal to the photographs of prizewinners.  114 well behaved children playing in sections from under 7 to under 17, had pre-qualified at 22 schools' events or through one of two Last Chance Saloons to win the right to take part.  The schools represented were from various towns and cities across the east of Scotland from Perth in the North to Muckhart and Dunning in the West.  The results have been graded on the Chess Scotland grading system;

The Delancey UK Schools' Chess Challenge 2012 (formerly the UK Chess Challenge) is a national competition with over 74,000 children taking part. The strongest players from the forty one Megafinals across the British Isles, qualify for either the Northern or Southern  Gigafinal in July.  The Gigafinal winners then compete to find the UK schools chess champion for 2012 at a Terafinal in August.

This major chess event is sponsored by Delancey with the Qatari Diar kindly sponsored additional prize money for the Megafinal winners.  Without this critical sponsorship this event could not take place. 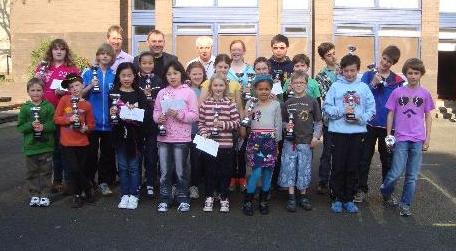