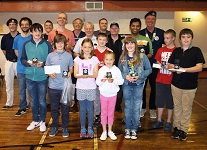 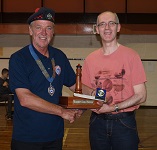 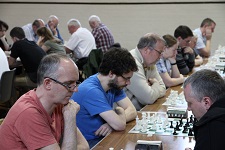 Please left click any image to enlarge.  Photo of players in action by John McNicoll and prizewinners by courtesy of Stewarton Bonnet Guild.

The Open section was close throughout the day with the top three players all on nearly the same points going into the last round. But Stephen Mannion pulled clear in the last round and won the event again this year. Second place was tied between Alan Grant and Alan Tate who split the combined prize monies for second and third places. Alex Gillies who won the event last year was unfortunate not to win any prize this year although he finished on a creditable two and a half points out of five.

Stewarton Chess Club would like to thank the officials from the Bonnet Guild committee for their assistance in setting up and running the tournament again this year as well as organizing the car parking. The medals awarded to prize winners were donated by McCluskey Browne and we would like to thank them for their continued support. We are also grateful to Robert and Mary Boyd - the caretaker staff at the Youth Centre who set up and cleared away the hall.

Our controllers handled all the problems of the tournament and we would like to thank them for all their hard work. Thanks to Alan Steel of our own Stewarton Chess Club and John McNicoll of Kilmarnock Chess Club, Stephen Taylor of Greenwood Chess Club.

The canteen staff again catered for all with a wide selection of hot and cold food and their ever popular range of home baking and our thanks go to Carolyn McNicoll, Marilyn and Victoria Grigor as well as Audrey McAngus for their work in keeping the players and officials fed throughout the day. Our special thanks also goes to Mr & Mrs Thomson, and Marilyn and Carolyn for supplying us with some delicious cakes and buns. Thanks also to Mrs Deans for her contributions to the event as well.

Details of all the prize winners:

There were only eight juniors in both the Under 12 and Under 14 sections so we combined the events but awarded separate prizes for both sections.

We were also pleased to present Teagan Neish from our own Stewarton Chess Club with the trophy she won for her attendance and improvement over the course of this chess season.