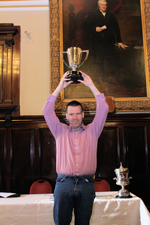 Player of the Year: Calum MacQueen

The Trades Hall in Glassford Street in Glasgow is the venue for the 119th Scottish Championships from 7-15th July, 2012. The Robert Adam designed building from 1794 will host an International Open, first prize £2000, in which the highest placed Scot takes the championship title. Private sponsorship has attracted a strong field of visiting GMs to challenge the top Scots. There are several ancillary events including a weekend congress.

Live Games, pairings and results at the Scottish Championship 2012 Website

August 2011 preview and sponsor: Chess Scotland is pleased to announce that the 2012 Scottish Championships will be greatly enhanced thanks to the support of an anonymous benefactor.

This person wishes to remain unknown and we will honour that request. I am not able to say how much the arrangement is for, other than it is a significant amount which should enable a large number of titled players to take part. The ambitious target figure is to have 10 GMs and 10 IMs competing and a total field of at least 80 players.

With some luck we will be able to put on an event to rival, if not better, Edinburgh 2009.

There is the potential for this deal to be extended to three years. It also means that we can now make a realistic bid for the 2014 Commonwealth Championships.

As part of the sponsorship deal Chess Scotland will be able to get 8 sensory boards. However, whilst this money can be used initially it must be returned to the Scottish Championship fund. This does allow us to get the boards and start the process of live games.

The AGM unanimously passed a vote of thanks to benefactor. Anyone else wishing their appreciation to be recorded should contact Alex McFarlane.