This year’s Liverpool Quadrangular was a resounding success for the young Scotland squad as they topped the under 14 and the under 12 tables. The third placed finish of the under 16’s, who were one player short, ensured that the squad finished ahead of their English North, English Midlands and Welsh rivals in the combined standings.

The first matches pitched Scotland against the North of England and the squad were led from the team room to the playing hall by debutants Arina Dobryden and Sorcha Shepherd bedecked with the Saltire flags the squad had brought with them.

In past Liverpool events the first round has been over quite quickly for some of the less experienced juniors who have raced out of the blocks and lost in a time scramble with an hour left on their clocks. The fact that the team room was still occupied only by nervous parents over an hour after play started is largely down to the influence of the Under 12 coach Richard Jennings who spent a good deal of time before the event preparing the team for the tournament and to the words of wisdom and experience from Ali Roy who stepped in at late notice to take charge of the under 14 team.

The Under 12’s were a first round revelation, battling their way to an 8-2 win. The Under 14’s almost matched them taking 7 of the 10 points on offer. The Under 16’s almost pulled off a result, narrowly going down 3-2 on the boards, with a late snatch of the game by Nandini Dutta’s opponent who found a winning tactic, when all was nearly lost. Nandini was extremely unlucky not to end the tournament with 3 wins, outplaying all of her opponents, only to suffer a sucker punch in two of her games.

After a short break and team talks the players returned to the hall for round 2 against a Midlands team who had problems putting full teams together. The Under 14’s were most affected with 6 of our players facing the same six non-existent opponents the Welsh had faced that morning. The six points on the board quickly turned to 7 as Lukah Connolly Sams despatched his opponent before most of the rest had settled down. The three other Scots who didn’t have the rest of the afternoon off matched Lukah’s win as the Under 14’s ran up a perfect 10 score.

The Under 12’s found the second round a bit tougher than the first but still emerged with a 6.5 to 3.5 win, with one point by default. Some of the first round winners lost but a draw by Dietah and a win for Chelsea meant that everyone had put something on the board by the end of round 2.

In the under 16's the Welsh had benefited in round 1 from the Midlands being two boards short, winning 4.5 – 1.5 and Scotland managed to match the Welsh score despite board 6 being a double default. This result combined with Wales and the North drawing meant that it was all quite tight at the end of the day in this age group and Scotland were in with an outside chance of winning all three sections.

At the end of the first day’s play Scotland were 2 points behind Wales in the under 16’s, 2 points ahead of the Welsh Dragons in the 14’s and 12’s. What was quite clear at the end of the first day was the squad unity and spirit was second to none, with all of the players, parents and coaches contributing to the success of the trip, helping and assisting with whatever they could. Having taken over the Premier Inn restaurant with chess on the Saturday night and then rested well, the bus trip to the venue on the Sunday morning was a mixture of excitement and nerves but there was also a quiet confidence among the players, as well as an air of determination.

The nervous parents from before round 1 were not quite quivering wrecks before the final round but there was a tense wait for the players to return when their games were over. A win, a draw and a couple of defeats in the first  Under 12 games to finish only added to the anxious atmosphere.

The Under 14’s were the first to put the title beyond the opposition, as a quick succession of victories against Wales put them over the finish line, with room to spare. The final match score of 6.5 – 3.5 meant that they topped the table by five points from their nearest rivals Wales.

The North secured the Under 16 title with a 6-0 win over the Midlands and despite our junior’s valiant efforts we were once again on the wrong side of a 4-2 score line. The tenacity of our juniors was exemplified by Euan Dawson turning down a draw in the last game to finish, despite the fact that the match and the section had gone. The game eventually ended drawn but not before Euan had tried everything to win.
The Under 16’s third place contributed to Scotland winning the overall event, as after the initial scare the Under 12 team steadied the ship and brought home a 6-4 win against Wales, with Finlay Gibb striking the decisive blow that put the Scots out of reach. 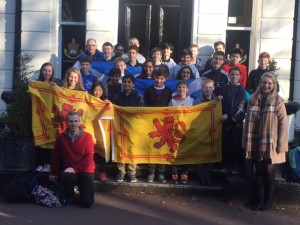 Despite the disadvantage of being a player down, Declan Shafi led his team from the front scoring three full points in his three games. Matthew Bilcliff was also unbeaten scoring 1.5 from the 2 games he played and benefiting from the Midlands being two boards short. The rest of the team all contributed to the overall score of 8.5 points and were unlucky not to gain a few more points, with a bit of inexperience costing at least a couple of points.

As well as captaining the team and playing on board one, Declan, with the help of Andre Antunes also assisted his players and the more junior squad members with preparation between rounds.

Seven of the Under 14’s were unbeaten throughout the weekend with Ben Volland, Marco D’Alessio, Andrew McMillan and Kalyan Sai Nandan Kante all returning home with 100% records. Ali Roy was the successful under 14 team manager and worked with the team during rounds going over their games.

The Under 12’s were as well prepared as any team that has went to this event and the team coach, Richard Jenning’s preparation before, during and after the event has set the standard for future events. Richard’s report on the weekend is below.

By Richard Jennings U12 Coach

The Liverpool Quadrangular tournament for Under 12’s, Under 14’s and Under 16’s took place at Liverpool College over the weekend of 3rd and 4th December 2016 with squads from Scotland, North of England, English Midlands and Wales.

On Friday night David Congalton announced that Scotland would play North of England and The English Midlands on the Saturday, by which time we would be on 2 wins out of 2 ready to face Wales on the Sunday morning. I considered this a bit presumptuous, but it turned out to be spot on, at least for the U12’s, after Scotland U12 won 8-2 on Saturday morning against North of England and 6.5 – 3.5 on Saturday afternoon against The Midlands.

Ritvik’s game against The Midlands caught my attention. After both players played solid chess they approached the endgame, level on material. However, Ritvik was saddled with a Bad Bishop while his opponent had a Good Knight. I was curious to see how this played out and was really impressed with the way the Midlands player used his small advantage to win the game, despite Ritvik doing all the right things to try and hold the position.  It was great to see such chess understanding in an Under 12’s game.

So the final match on the Sunday between Scotland and Wales was indeed the decider, with Scotland going into the match as favourites having won a couple more boards than Wales on the Saturday. Both the Scotland and Wales squads looked great wearing their National chess T-shirts in their respective National colours. This match was in my opinion the best of the three. The quality of play on all ten boards was consistently high, which was a credit to both squads. After 90 minutes, play was still underway on all ten boards, which is remarkable for an U12 match over so many boards.

The first game to finish, ironically was the game with the most moves. Chelsea is a player who does not hang around at the chessboard and she eventually won an 80+ move game that ended up as King and 4 pawns against King and four pawns. I suspect with best play, the game should have been a draw, but both players kept looking for ways to make progress and went into a race to promote, that looked equal, only Chelsea queened with check. Ouch! After that, Chelsea showed great technique and won without hesitation. Exciting stuff!

The players on the upper boards showed their experience and reeled in a good number of points, but it was truly a team effort in this match against Wales, and the two points gained on boards 9 and 10 proved essential to win the tie. A special mention to Finlay Gibb, who had never played a game with a time control this long before,  and who showed composure to win a long hard game after he had to suffer the indignity of having his King checked all over the board by his opponent’s Queen, before he eventually won.

Thus Scotland emerged 6-4 winners against Wales and were the convincing winners of the U12 event.

I was very pleased to see that the organisers had moved to a time control with 10 second increments, which allowed the children to experience playing quality endgames rather than the desperate time scramble usually associated with a quick-play finish.

It was my pleasure to act as coach for the under 12 Squad, who developed a strong camaraderie over the weekend, and I hope to continue working with this group in the near future. The support provided by the accompanying parents should be acknowledged too and a special thank you to David Congalton of Chess Scotland for his leadership and coordination throughout the weekend and all the preparation extending back many months.