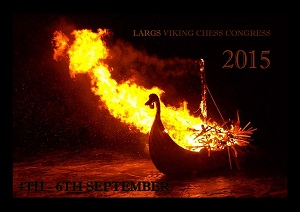 A total of 52 players competed at this year’s Largs Viking Chess Congress. After 3 days of chess, the winners for 2015 were:

Thanks to those who kindly made donations, the Largs Viking Festival for their continued support which also included prize presentation by Directors William Ferguson and Rev. Gordon Fyfe, arbiter John McNicoll for his first class controlling, Chess Scotland  and all the competitors for making this weekend such a success. We hope you all enjoyed your weekend and look forward to seeing you all again next year!

July 26 2015: We invite you all to this year’s Largs  Viking Chess Congress, held on the 4th to the 6th of September at the Sportscotland National Centre Inverclyde in Largs.

The congress takes place during the popular Largs Viking Festival and we are able to offer accommodation at the venue for those of you who wish to soak up the festival atmosphere.

We have booked Hillcrest Cottage which will offer self-catering accommodation for 6 people. The cottage consists of 3 twin bedrooms and staying is priced at £25pppn. Due to the limited rooms available, we are unable to offer single night stays or single occupancy. To book your stay please contact the congress organizer Gary McPheator, by phone (07411196422) or by email (gmcp3@hotmail.com).