Resurrection-The Rise of the Pawns 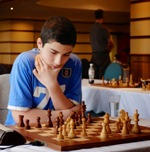 Murad Abdulla from Aberdeen has won the Jonathan Rowson Award for the top Scottish Boy chess player of 2013-2014.

On his ninth birthday Murad learnt how to play chess from his father and brother. He was first noticed after winning the NEJCA Ellon P5 & Under with a perfect 5/5. Since then, Murad has established himself as one of Scotland’s top juniors.

Murad ended the season by becoming the U/14 Commonwealth Boys Champion, scoring 6/9. He achieved this while also playing in the main Commonwealth Championships, where he scored 4.5 out of 9.

Still only 14, Murad is one to watch for the future.