July 12: There has been a change to the England Robinson team. It is now updated on the Chess-Results page. 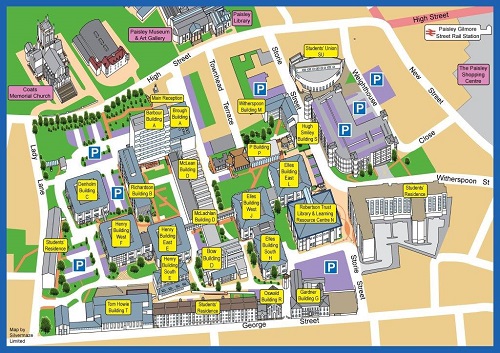 Car Parking: Immediately below and to the left of student residence off Storie Street (access from George Street) is the parking which should be used by those who have been granted passes.

June 26: Chess Scotland is pleased to announce the teams which will represent Scotland in this year's Glorney Gilbert International in Paisley (5 rounds, July 16-18). Congratulations to all of the following players. (Please note that all Scotland teams are listed in June FIDE rating order and then by alphabetic order of surname if no FIDE. The actual playing order may be different and FIDE ratings may change on July 1.)

All 120 players from all 6 countries are now listed on the Chess-Results page. (NB Players may not be in board order).

June 16: The organisation task for the Glorney is progressing.

Thanks to the admin staff at Paisley University campus we now have over 150 rooms available in student halls of residence which should be sufficient to accommodate required numbers. Some players and accompanying parents, chaperones will be staying off campus. The student accommodation is a short walk to meal facilities and the playing venue.

Bus travel has been arranged for the French and Dutch teams who will be arriving at Glasgow and Edinburgh airports. Invoices have been submitted to all federations for their accommodation, travel and meal costs.

We will be publishing the full Scotland teams shortly. Our intention is to also publish the names of players from all six countries before the competition starts.

June 6: Chess Scotland is pleased to announce the team which will represent Scotland in this year's Glorney Cup competition in Paisley (5 rounds, July 16-18). The other Scotland teams will be announced shortly.

May 25: Organisation for this year's event is well underway. We can confirm that 6 nations will be taking part - England, Ireland, Wales, France and Netherlands will join host Scotland for an exciting competition at the University of West Scotland in Paisley.

The competition is split into 4 sections

Dates: Arrive July 15, 2 rounds July 16 and 17, 1 round July 18, depart July 19. The event follows on from the Scottish Championships which will be held at the same venue.

We would like to thank local firm Ecosse Doors Ltd  for their generous sponsorship.

We would also like to thank the  Scottish Junior Chess Association Educational Trust who are fundraising for the event.