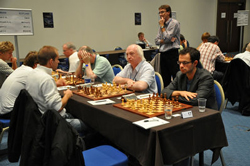 Scotland players had a successful performance with three players  above rating and two level.

The team finished in line with initial seeding. Tenth seeds Germany defeated double Olympiad champions Armenia in the final round to take the championship.

Preview: 38 countries participate in the open section, with 135 GMs and 175 titled players.

Scotland is represented by:

Round by round Scot scores