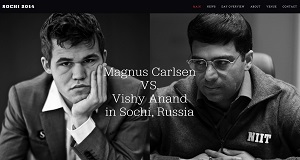 Carlsen took an unassailable 6.5-4.5 lead by winning the 11th game, the final 12th game not played. Anand proved a much tougher challenger than pre-match forecasts suggested. A stunning double blunder in game 6 allowed Carlsen to take the lead when Anand missed a simple trick by which he could have forced a winning position.

The official website was excellent and offered entertaining live commentary by top GM Peter Svidler although he did tend to talk over his co-host.

This was a reprise of the 2013 match when Carlsen took the title by defeating Anand 6.5-3.5 in Chennai, India. Despite his stellar career Anand was considered a surprise winner when he won the right to challenge Carlsen by winning the Candidates tournament in March.