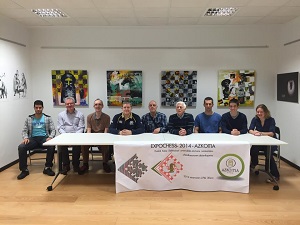 Scotland played a two round challenge match against the Basque Federation in Azkoitia, northern Spain on November 29, 2014 as part of the Expochess festival.

Scotland won the first round 5-1 and drew the second 3-3.

David Moyes invited the Scotland team to watch the Real Sociedad match against Elche at the club's Anoeta stadium in San Sebastian on Friday 28th.