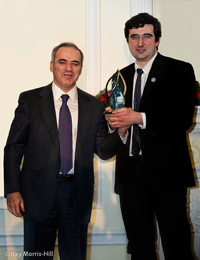 English players and drawing with the rest. Kramnik scored 16/9 on the 3 pts for a win football scoring system to finish ahead of Nakamura (USA) 15 and Carlsen (Norway) on 14.

Luke McShane was the only home player to hit form and was challenging for first place until losing to Kramnik in an unclear struggle. The online commentary and web reports were a model of how a tournament should be presented and the innovation of a daily guest player as co-commentator was a big success.

Preview: The world’s top four players compete in the 3rd London Chess Classic. The 2800 club of Magnus Carlsen (2826, Norway), world champion Vishy Anand (2811, India), Lev Aronian (2802, Armenia) and Vladimir Kramnik (2800, Russia) head the nine player field with Michael Adams of Cornwall the best hope for a home winner. The odd numbered player will assist with commentary on their day off.

Two countries smaller than Scotland have a player in the world top 4!