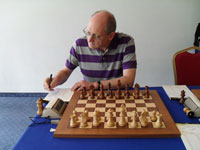 This year’s world seniors champion was the French (ex-Ukraine) IM, Vladimir Okhotnik. The women’s title was taken by WIM Galina Strutinskaya (Russia). The event was played in the beautiful, north Adriatic coastal resort of Opatija (Croatia). The sun shone every day, the wind was light and the temperature averaged a mild 15-17 degrees or so. The old Austro-Hungarian emperors certainly knew a thing or two about its healthy climate when they established Opatija’s earliest expansive hotels and private villas in the nineteenth century and used it as their own select playground.

Two Scots, Philip Giulian and myself, competed. Philip felt rusty but hopes to get many more games in now that he’s retired from teaching. He scored an eminently acceptable score of 7/11 in what was his debut in seniors’ chess. Due to the vagaries of the Swiss system, Philip’s ELO rating performance for the event fell just short of his actual 2296 rating, but I am certain that he is soon likely to be scoring regular above 2300 performances on this form and he told me that he was more than pleased with the outcome.

I scored 7.5/11 and even won a small cash prize for my share of 9-19th places (18th on tie-break). Like Philip, however, I had slightly lower than expected average ELO opposition. I made a 2369 ELO performance, which was lower than my 2400+ performance in last year’s world championship, where I scored a half-point less, but against rather stronger opponents. I battled hard in Opatija but made far too many unforced errors to do other than gain five or so FIDE rating points. I did, however, have the satisfaction of winning the first of the two side Blitz tournaments.

In the circumstances, I don’t think that any of my games are of particularly great interest this year. The editor will no doubt ask Philip about his games separately. Of much more interest, to my mind, are Okhotnik’s games. Born 1950, a newcomer to the event, he was far from being the pre-tournament favourite but this year’s event had great strength in depth and was fairly wide open. Okhotnik perhaps made the fewest unforced errors. His game certainly displayed subtle twists in his opening repertoire, excellent levels of technique and a thoroughly battling spirit.

Okhotnik scored 9/11 (a 2612 ELO Performance). Apart from the honour of winning the gold medal, his prize also includes the automatic award of the grandmaster title.  GMs Davorin Komljenovic and Gennadi Timoshchenko (both 8.5) took silver and bronze respectively. 19 GMs and 31 IMs participated (both open and women’s events). Okhotnik set himself up well for his final push for the title with this crisp win against GM Mihai Suba in round 9.

I'm no expert in this particular variation but it strikes me that White expects a lot here by taking time to open the h-file in place of more immediately purposeful queenside and central development. Okhotnik's game is solid, with a good grip on sufficient central space and he doesn't seem unduly fazed by Suba's slightly off-beat approach to a main line.

Black needn't fear an exchange on a5, after which the power of Black's bishop pair would tell in his favour. White has opened the h-file but he can't seem to do anything with it due to his relatively passive and slightly backward piece and pawn development.

In fact, now it's Black who will gain control of the h-file. White has an extra centre pawn but his overall game remains too passive to make anything much of that potential positional trump either. Black now has somewhat the better chances and with his next move, White decides that he has no better than to seek simplifying exchanges.

This slack move, however, is seriously doubtful and may even be the losing move. White should have continued at once 24.Be3, so that after 24...Rh8 25.Rxh8 Rxh8 26.Kd2, he can hope to defend robustly, although I would certainly still prefer Black's chances.

The difference here is that after exchanging of bishops, Black's queen and rook will now be able to penetrate with terrible force on the kingside.

Unable to defend his parlous f-pawn, White is forced into an adventure on the queenside in a desperate bid to maintain at least a material balance.

But after this move, White can only defend his e-pawn by getting his king and rook into a desperately passive huddle on the first rank.

And now it's a deadly pawn race that only Black can win. Black's pawns safely defend his king against any possible attempt by White's queen to save matters at the eleventh hour by delivering perpetual check.

Finally, I would like to take this opportunity to thank the president of FIDE zone 1.1, who nominated me on behalf of the zone for the generous offer by the organisers to fund the hotel costs of one representative from each FIDE zone. I believe that this was at least in part recognition of my having won the gold medal for the best performance on board one for Scotland in last May’s Euro Seniors’ Team Tournament.  I’ll be back in the world championship again next year!