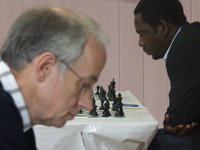 The event had a relaxed atmosphere while simultaneously providing players with a platform for competitive chess. The Kings section had the added bonus of giving players the opportunity to play FIDE-rated games.

Special thanks to Chief Arbiter Donald Wilson for ensuring the chess ran very smoothly. Also to Douglas Chappelle, Mel Burt & John Lee who were of great help in the organisation process.

Thanks to Peter Woods of Chess Suppliers for providing some great photos of the event.